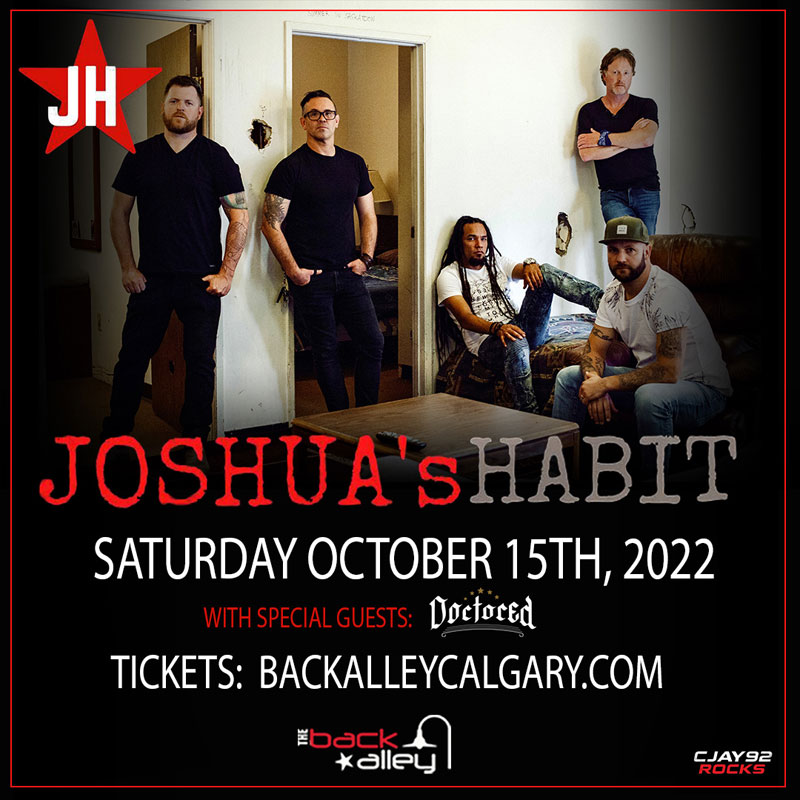 Joshua’s Habit are back to play an incredible night of rock at the legendary Back Alley Nightclub in Calgary with special guest Doctored!

Riding the insurgence of Alberta’s new wave of modern rock, Joshua’s Habit was formed in Calgary at the turn of the millennium. It wasn’t long before they’d become one of the hottest tickets in southern Alberta, and were branching out across the province and the rest of western Canada. Their work ethic was rivalled only by the reputation they were gaining for their live show.

Joshua’s Habit’s recorded 4 studio albums, however, WASH THE FILTH (Produced by Kerns) and recorded in Greenhouse studios in Vancouver debuted in the top 5 on many radio stations’ new album charts in 2007. The lead single “Pointing Fingers” was named the regional winner of the Canadian National Songwriting Competition. Joshua’s Habit also became national finalists in the Bodog Music contest for a million dollar record deal. The ensuing tour schedule took them coast to coast, and lasted for a couple of years while they opened for the likes of Pearl Jam, The Trews, Big Wreck and Jeff Healey. Joshua’s Habit then went on to win a winners-take all 2009 Star Search Competition put on by Calgary radio station The Vibe 98.5. This earned them the right to open for Collective Soul and cash in a cool $100,000 to help fund the next album which came in the next year in the form of TORN, as well as the production of the video, for the lead single, “Whiskey and Women.” Joshua’s Habit toured the album extensively in 2010, but at the end of the tour, the band decided to take a break and put the band on hiatus.

Joshua’s Habit continued to collaborate throughout the years. The band started tracking demos and put the final touches on a new studio album entitled THE HARD ROAD throughout 2020 and 2021. The full album was officially released on June 18, 2021. The most successful single from the album has been “War”, receiving radio play across Canada and well over 250,000 video views on Social Media thus far.

Joshua’s Habit are about to embark on a major continental tour and is continuing to write for the follow up album to THE HARD ROAD. Sonically huge. Rhythmically driven, and emotionally written and performed. THE HABIT is back!

Their members have combined experience from numerous other touring bands. “Doctored” takes a new spin on the 90’s/2000’s rock nostalgia feel and makes it their own!

Their high energy and interactive experience ensures a tasteful experience.

They’re rhythms and hooks will leave you wanting more every time!

Book them now today to get a glimpse of what’s to come!